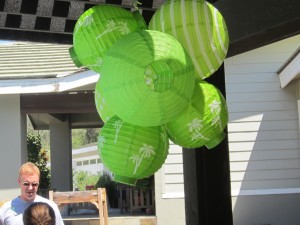 My daughter has been to camp. The kindergarten class was here eating hot dogs and splashing in the pool. We spent an evening on the front porch with visiting family eating grilled peaches and heaps of guacamole.

In short, summer is finally here.

A summer project I am so excited about beginning is the Exodus 1:8 Project, chronicling the signers of the Declaration of Independence. I am in a season of change. For various reasons my family is moving to a different church, Brighten A Corner needs new leaders to join our team before we can serve again, and my family life is infused with the freedom that comes from children maturing and the responsibility that comes with parents maturing. I find myself calmly and methodically searching out the character traits I want to surround myself with, and studying what great leaders look like. This is a wonderfully interesting journey.

My parents just returned from a quick trip to New Hampshire. They are preparing to sell the final portion of my mother’s family land, the last of my heritage in the far eastern state, and it seems fitting to begin with New Hampshire’s first signer, Josiah Bartlett…

As I research I see Josiah Bartlett as dedicated, hard working and devoted to his family.  In his teens he had a relative, Dr. Webster, who taught him Greek and Latin. Those languages served as his foundational ability to acquire knowledge. He didn’t have an advanced degree, but his intellect and determination served him well.

He became a physician and they spent the first decade of their marriage as husband and wife, enjoying his success. The respect he earned was far reaching and he received appointments from the governor to lead the local militia and the justice of the peace. I envision him as a humble man, not seeking positions of importance, but acquiring them as a result of his character.

“A man of the distinguished powers of Doctor Bartlett, and of his decision and integrity, was not likely long to remain unnoticed, in times which tried men’s souls.”–Colonialhall.com

The governor was loyal to the British, and as Bartlett’s devotion to the cause of freedom increased, he was stripped of the appointments he was given. That didn’t stop the young patriots of the area. They formed their own organization, The New Hampshire Provincial Congress. The Founders of our nation surrounded themselves with people committed to the cause; founded on principles that necessitated being unshakable by pressure and pain.

They didn’t allow circumstances to dictate their devotion.

It is rumored that Bartlett’s house was burned as a result of his signing The Declaration, but it actually burned down  in 1774, perhaps ignited by neighbors loyal to the Crown. Bartlett missed the First Continental Congress because his house had just been destroyed.

He put his family first.

After the Declaration had been finalized that hot Philadelphia summer of 1776, they signed it according to geography beginning north and heading down the eastern seaboard. Josiah Bartlett was the first to sign the Declaration following John Hancock.

During his life he held many positions of distinguished excellence: “Delegate to Continental Congress; Signer of the Declaration of Independence; Signer of the Articles of Confederation; State court Judge; Member of Federal constitutional convention; Elected Governor of New Hampshire.” Ushistory.org

According to the book The Wives of the Signers (which was originally published in 1912 as The Pioneer Mothers of America) “Mrs. Bartlett died in their new house in Kingston, in July, 1789, and her death was a great blow to her husband, who was at the time Chief Justice. The following year he was chosen President of New Hampshire, which office he held until 1793, when he was elected [the first] Governor…He declined re-election and died shortly afterward in the sixty-sixth year of his age, broken down, according to his own declaration, by grief.”

In recent history, his name was brought back to life in the TV series West Wing, as the president in the show had the same name, Josiah Bartlett.